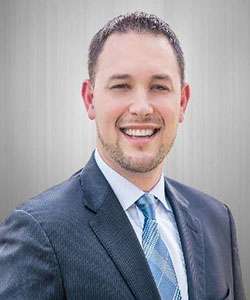 Brad Horswell is a native Houstonian who was born and raised on the North East side of Houston in Crosby, TX. He is married to his wonderful wife Michelle who is the Learning and Development Manager for the Community Resource Credit Union. Brad & Michelle live in Humble, and have a 2-year-old son that goes by Levi Jamin! Brad did the majority of his undergraduate studies at Texas Tech University in Business and Comprehensive Financial Planning. During college, he worked in an internship at the Houston Chronicle for Sales and Marketing, served in their Six Sigma program, and his primary project was working with the Project Manager in the product launch for the e-Edition. Brad transferred from Texas Tech University to Houston Baptist University, where he finished his undergraduate studies with a double major in Business Administration and Business Management.

Following graduation, Brad started his career as a Banker & Loan Officer at an elite Credit Union in Iowa. At the Credit Union, he continued to build upon his financial planning education where he gained an extensive understanding of finance, credit, banking, and everything related to consumer banking. Due to his individual performance, he was promoted to Branch Manager where he successfully turned a highly underperforming bank into one of the top performing branches in the organization. Due to a life change, Brad left the Credit Union to move back to Houston where he took over another underperforming bank within Amegy Bank as the Assistant Vice President for that operation. During his tenure at Amegy Bank, he was able to spur another turnaround of that operation into a top performing branch with that organization, and expand his reach from consumer banking to business banking.

God planted a desire in Brad at birth for entrepreneurship, and Brad was able to finally make that leap of Faith to start his own business. In 2015, he launched The Horswell Group with a vision of creating a privately owned Comprehensive Financial Planning firm that will revolutionize the real estate and financial planning industries. In 5 years, he has successfully completed the first two phases of that by establishing an independent insurance agency known as Horswell Insurance, and a residential real estate brokerage known as Horswell Properties. Brad is licensed in all forms of insurance and a licensed real estate Broker. He will complete his Certified Financial Planning studies in the next 1-2 years to gain his CFP designation, and add the wealth management division to The Horswell Group, known as Horswell Wealth.

Ultimately, all that Brad has accomplished is based solely on the will, credibility, strength, and glory of His Lord and Savior Jesus Christ. Without the transformational change by the indwelling of the Holy Spirit, Brad would be dead or jail. Brad is a living and breathing testimony of the restorative power of Jesus Christ. To Him be the Glory!