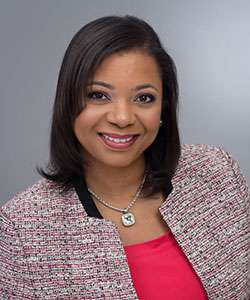 Ingrid M. Robinson is the President of the Houston Minority Supplier Development Council (HMSDC). HMSDC is a business development organization designed to actively involve its members, both minority business enterprises and major corporations in efforts to increase and expand business opportunities and business growth for Minority Business Enterprises (MBEs) while driving excellence in supplier diversity
and supplier development. Currently, HMSDC’s membership is comprised of more than 130 major corporations and more than 820 minority businesses. HMSDC MBEs have a total economic impact of $23.2 billion dollars on the economy with $17 billion dollars in annual revenue that results in the creation and/or preservation of more than 82,000 jobs.

Before she began her consulting practice, Robinson served as the Director of State and Local Government Affairs for Halliburton. Her department interfaced directly with a broad array of government and non-governmental entities. As a leader in the department, she worked to influence the development of laws, regulations and policies that fostered sound national and global economies. She developed political strategies to promote and protect the interests and competitiveness of Halliburton, its affiliates and its individual facilities.

Prior to assuming that role, she utilized her fifteen years’ experience in minority and women business development that includes private, government and non-profit sectors to lead Halliburton’s Supplier Diversity efforts. She is seen as a leader in the field, having served as an expert guest speaker internationally on the topic of supplier diversity and local content development including the CWC Oil
and Sustainable Development Conference in London, England and the America-China Women’s Business Conference in Washington, DC.

Robinson has now come full circle to lead the organization she once served as Assistant Director for in the mid 1990’s when the Council was known as the Houston Minority Business Council (HMBC). While at the HMBC, she played an integral part in helping HMBC receive its first Council of the Year Award in 1999 from the National Minority Supplier Development Council. Now, she returns to the organization as it is awarded its 7 th National Council of the Year award for 2016. Robinson also served in various city and state governmental positions including terms in the City of Houston’s Mayor’s Office for Affirmative Action, the office of Texas State Senator Rodney Ellis, and the offices of Texas State Representatives Garnet Coleman and former Texas State Representative now US Congressman Henry Cuellar.

Robinson serves on the Port Houston Commission’s Business Equity Advisory Council, US Global Leadership Coalition Texas Advisory Committee, the World Chambers of Commerce Texas Advisory Board, Community Works CDC, and Black Greeks Speak. She also served on the City of Houston Women and Minority-Owned Business Task Force. She is a member of Sigma Gamma Rho Sorority, Inc. She is a former board member of the Houston Area Urban League, the Louisiana Minority Business Council and Diversity Information Resources.

Robinson received a Bachelor of Science degree in political science from the University of Houston and completed the Community Minority Business Advancement Program at the University of Texas – McCombs School of Business. She graduated in May of 2010 with an Executive Masters of Business Administration degree from Rice University. She has two teenage children John-Anthony and Sydni.